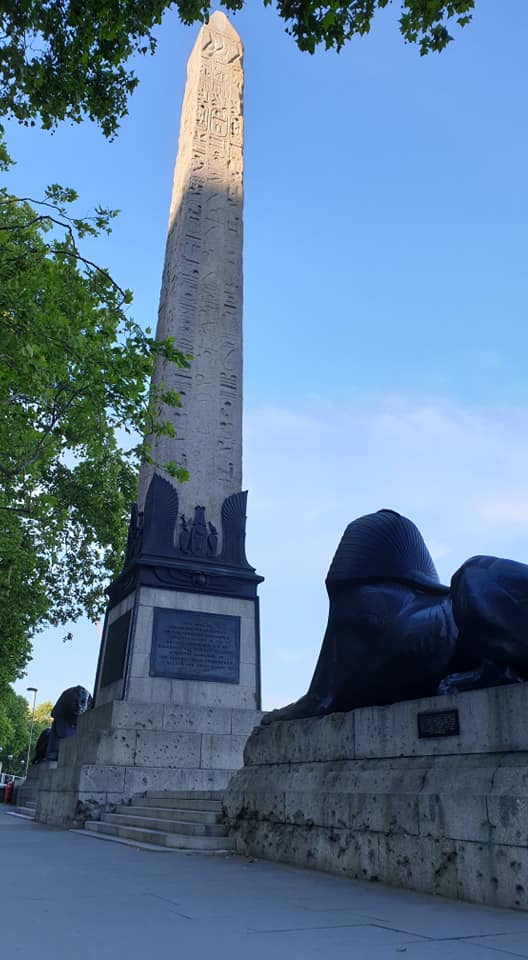 Cleopatra’s Needle, the one on London’s Victoria Embankment near Embankment tube station is one of two similarly named Egyptian obelisks. The other one is in Paris. It is London’s oldest monument and was presented to the UK in 1819 by the then viceroy of Egypt Muhammad Ali, to commemorate the two victories in 1801 at the Battle of the Nile by Admiral Nelson and at the Battle of Alexandria by Sir Ralph Abercromby where the two monuments were moved to by Emperor Augustus after Cleopatra’s death.

The monument which is about 21 metres high, dates back to 1450 BC is inscribed with Egyptian hieroglyphs and was erected 1878. The two bronze sphinxes bearing bomb scars from the first world war were added in 1882 by George Vulliamy, are facing the wrong way! They are supposed to be guarding the monument not admiring it! Buried beneath the monument are some artefacts (memorabilia) from 1878. They include a picture of Queen Victoria, coins, a railway guide etc.

Cleopatra’s Needle can be found here on the Embankment, London, WC2N 6NS. The nearest tube/underground/metro stations are Charing Cross, Embankment and Temple.