THE HIGHLIGHTS AT Canterbury & Leeds Castle

The beautiful Leeds Castle benefits from an absolutely idyllic location - surrounded by 500 acres of parkland and gardens, it's easy to see why it was described as "the loveliest castle in the world"! Explore Leeds Castle, Canterbury Cathedral, Dover & Greenwich in our luxury air-conditioned and heated coaches and escape the city as you discover the countryside of Southern England. 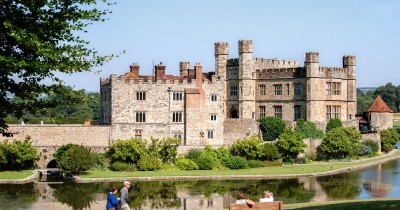 Stunning vistas of the White Cliffs of Dover.

Leeds Castle in Kent, England, has been called the “loveliest castle in the world”.

In 1278 the Castle became a royal palace for Edward I and his Queen, Eleanor of Castile.

Stay overnight in the beautiful setting of Leeds Castle and enjoy strolling around the castle grounds and gardens when the estate is closed to the general public. Enjoy Bed and Breakfast accommodation in the refurbished Stable Courtyard Bedrooms with full English breakfast served in the oak beamed 17th century Fairfax Hall Restaurant.

For an even longer stay, indulge yourself in a unique holiday cottage experience.

Leeds Castle has been a Norman stronghold; the private property of six of England’s medieval queens; a palace used by Henry VIII and his first wife Catherine of Aragon; a Jacobean country house; a Georgian mansion; an elegant early 20th century retreat for the influential and famous; and in the 21st century, it has become one of the most visited historic buildings in Britain.

The city of Canterbury has been the centre of Christian worship for over 1000 years. The cathedral, infamous for the murder of Thomas Beckett in 1170. When Henry II snapped "Who will rid me of this turbulent priest?", four of his knights rode to the Cathedral and murdered Beckett by slicing his head off. Canterbury immortalised by Geoffrey Chaucer in The Canterbury Tales became the centre of one of the most important medieval pilgrimages in Europe.