THE HIGHLIGHTS AT Windsor

Entrance to Windsor Castle and Other Windsor Tours

A visit to the fabulous Windsor Castle is a right royal treat! It’s widely known that the Queen considers this lavish home her favourite weekend residence, so follow in her footsteps during one of our splendid Windsor Castle tours. Whether you want to visit Windsor Castle only, or combine it with another top attraction, you can do exactly that with a range of tours departing conveniently from Central London. 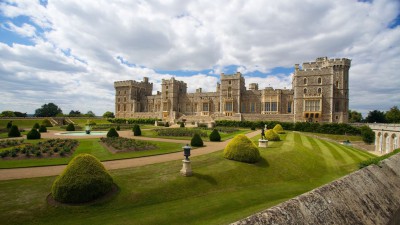 Consists of 3 wards and a state apartments.

Also has a chapel at the east End.

The garden adds to the delight of the architecture.

Windsor Castle is a royal residence at Windsor in the English county of Berkshire.

It is notable for its long association with the English and later British royal family and for its architecture.

The original castle was built in the 11th century after the Norman invasion of England by William the Conqueror.
Since the time of Henry I, it has been used by the reigning monarch and is the longest-occupied palace in Europe.
The castle's lavish early 19th-century State Apartments were described by early 20th century art historian Hugh Roberts as "a superb and unrivalled sequence of rooms widely regarded as the finest and most complete expression of later Georgian taste.

Inside the castle walls is the 15th-century St George's Chapel, considered by the historian John Martin Robinson to be "one of the supreme achievements of English Perpendicular Gothic" design.