THE HIGHLIGHTS AT The Cotswolds

Visit the Cotswolds and experience stunning countryside sights just perfect at any time of year. Miles of rolling hills, pretty villages with traditional stone architecture and gentle rivers are a winning combination which blend together to make the Cotswolds the highlight of the British countryside. See this beautiful area during one of our Cotswolds tours that will take you deep into the heavenly landscape. Taking a Cotswolds tour from London is one of the best ways to fully appreciate this stunning part of England. 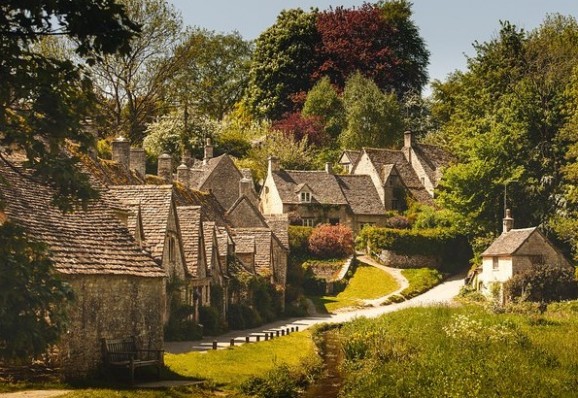 Blockley - with its peaceful nature and beautiful appearance it has golden Cotswold cottages and limestone walls punctuating the rolling hills.

Kingham - a community you’d expect to find in a story book".

Mickleton - with an "abundance of black and white thatched cottages interspersed with limestone architecture are glorious to look at.

Bibury - one of England’s most iconic hamlets and home to the peaceful River Coln and some of the most photographed houses in the country.

Bredon - by the River Avon, a "delightful village .

The Porch House pub in Stow-on-the Wold can claim to be England’s oldest pub as it dates back to 947 AD when it was a hospice (a place of rest and refreshment) attached to Evesham Abbey. Carbon dating has confirmed that some of the timbers date from this period. Still visible in the public rooms are ‘witches‘ marks’, which are signs meant to ward off spells. It now has a restaurant with welcoming log fires.

In the mid-1600s the first and last battles of the English Civil Wars were fought in the Cotswolds at Edgehill and Worcester respectively.

home to 5000-year-old Neolithic stones called the Rollright Stones. You can walk amongst the ancient stone circle of some 70 stones, which was probably used as a council circle by local tribes.

There is evidence of Neolithic settlement from burial chambers on Cotswold Edge, and there are remains of Bronze and Iron Age forts. Later the Romans built villas, such as at Chedworth,settlements such as Gloucester, and paved the Celtic path later known as Fosse Way.

During the Middle Ages, thanks to the breed of sheep known as the Cotswold Lion, the Cotswolds became prosperous from the wool trade with the continent, with much of the money made from wool directed towards the building of churches. The most successful era for the wool trade was 1250–1350; much of the wool at that time was sold to Italian merchants. The area still preserves numerous large, handsome Cotswold Stone "wool churches". The affluent area in the 21st century has attracted wealthy Londoners and others who own second homes there or have chosen to retire to the Cotswolds.
The name Cotswold is popularly attributed the meaning "sheep enclosure in rolling hillside.