THE HIGHLIGHTS AT Buckingham Palace

Buckingham Palace was built by the Duke of Buckingham in 1702. King George III bought it in 1762 but it wasn’t until 1837 when Queen Victoria who became the first monarch to live there. It has been the official London home and office of the monarch ever since. It has 775 rooms, including 19 state rooms, 78 bathrooms and 188 staff bedrooms and 350 clocks. Changing of the Guard takes place in front of Buckingham Palace in the morning on certain days of the week and can be cancelled in very wet weather. 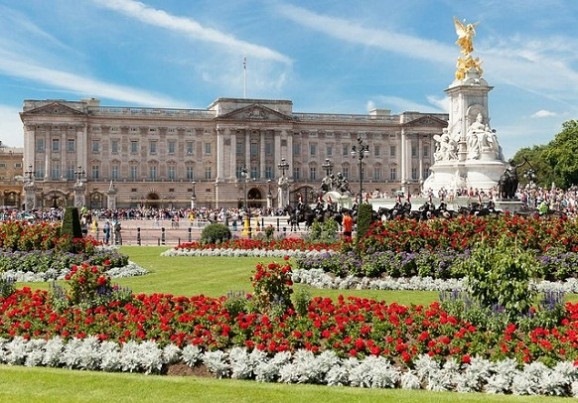 The State Rooms are the public rooms in the Palace where The Queen and members of the Royal Family receive and entertain their guests on State, ceremonial and official occasions.

he Throne Room's dramatic arch and canopy over the thrones was the masterpiece of the architect John Nash, and was greatly influenced by his background in theatre set designs.

The Picture Gallery inside Buckingham Palace displays some of the greatest paintings in the Royal Collection. It was created by the architect John Nash as part of his transformation of Buckingham House into a palace for George IV from 1825.

There are two thrones in the Ballroom which were made for the coronation ceremony of King Edward VII and Queen Alexandra in 1902. The thrones are located in a dramatic setting. Statues by William Theed stand on top of a triumphal arch, flanked by sphinxes and enclosing the throne canopy. The winged figures at the top of the arch symbolise History and Fame and support a medallion with the profiles of Queen Victoria and Prince Albert.

When you visit the Palace during the summer, you enter the State Rooms by walking up the Grand Staircase. Designed by John Nash and inspired by his experience working in London theatres, it provides a sense of excitement and expectation for the rooms that follow.

Buckingham Palace resides in the very heart of London, surrounded by the lavish St. James and Green Park.

Built as the Buckingham House in 1703, the palace was originally constructed by English Gentleman and architect William Winde as a large townhouse for Duke Buckingham.

In total, the Buckingham palace grounds spans over 39 acres.

Buckingham Palace  is the London residence and administrative headquarters of the monarchy of United Kingdom. The last major structural additions were made in the late 19th and early 20th centuries, including the East Front, which contains the well-known balcony on which the royal family traditionally congregates to greet crowds. A German bomb destroyed the palace chapel during world war II.Buckingham Palace finally became the principal royal residence in 1837, on the accession of Queen Victoria, who was the first monarch to reside there; her predecessor William IV had died before its completion.