THE HIGHLIGHTS AT The London Eye

Enjoy the view of The London Eye was opened in 2000 and is 135m high. It has 32 glass-walled observation capsules, each holding 25 observers, offering visitors breathtaking views for up to 25 miles (40 Kms) around the capital city. On a clear day Windsor Castle can be seen on the Western Horizon. One entire revolution takes approximately 28 minutes. 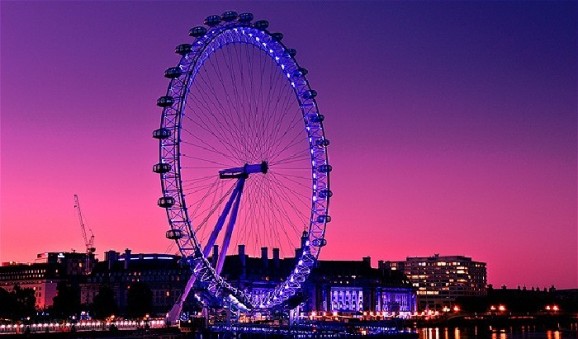 An impressive feature of London's skyline, the London Eye is a regular stop on most bus tours - but nothing beats pre-booking your "flight" ticket to board and enjoying the impressive panorama below including famous landmarks such as the Houses of Parliament, St. Paul's Cathedral and Westminster Abbey.

On average the London Eye receives more visitors per year than the Taj Mahal and the Great Pyramids of Giza.

On average the London Eye receives more visitors per year than the Taj Mahal and the Great Pyramids of Giza.

The London Eye can carry 800 people each rotation, which is comparable to 11 London red double decker buses.

Capsules travel at a leisurely pace of 26cm per second, which is twice as fast as a tortoise sprinting!

The London Eye was formally opened by the Prime Minister Tony Blair on 31 December 1999, but did not open to the paying public until 9 March 2000 because of a capsule clutch problem. The London Eye was originally intended as a temporary attraction, with a five-year lease.