THE HIGHLIGHTS AT Westminster Abbey

Just a short walk from the Thames, Westminster Abbey is a must-see and a significant structure in British history. This beautiful gothic church is a UNESCO World Heritage Site popular with many visitors to London. Complete with paintings, stained glass windows and other religious artefacts, Westminster Abbey owns the most important collection of monumental sculpture anywhere in Britain. 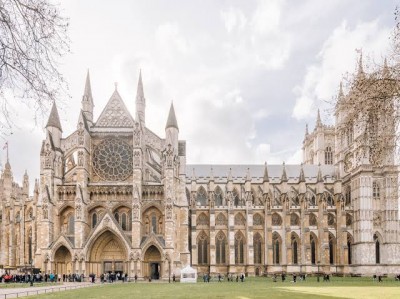 A splendid mixture of architectural styles, Westminster Abbey is considered the finest example of Early English Gothic. It's not merely a beautiful place of worship – the Abbey is still a working church and the stage on which history unfolds. For centuries, the country's greatest have been interred here, including 17 monarchs from King Henry III (died 1272) to King George II (1760). Much of the Abbey's architecture is from the 13th century, but it was founded much earlier, in AD 960

At the heart of the Abbey is the beautifully tiled sanctuary, the stage for coronations, royal weddings and funerals. Architect George Gilbert Scott designed the ornate High Altar in 1873.

In front of the altar is the Cosmati Pavement, dating to 1268. It has intricate designs of small pieces of stone and glass inlaid into plain marble, which symbolise the universe at the end of time (an inscription claims the world will end after 19,683 years!). At the entrance to the lovely Chapel of St John the Baptist is a sublime translucent alabaster Virgin and Child, placed here.

The most sacred spot in the Abbey is the shrine of St Edward the Confessor, which lies behind the High Altar.

The Quire (choir), a stunning space of gold, blue and red Victorian Gothic above a black-and-white chequerboard tiled floor, dates to the mid-19th century.

Henry VII's magnificent Perpendicular Gothic–style Lady Chapel, with an impressive fan-vaulted ceiling and tall stained-glass windows, was completed after 13 years of construction in 1516.

Opened in 2018, the Queen's Diamond Jubilee Galleries (an additional £5) are a new museum and gallery space located in the medieval triforium, the arched gallery above the nave.

hapter House dates from the 1250s and was where the monks would meet for daily prayer and their job assignments, before Henry VIII's suppression of the monasteries some three centuries later.

Pyx Chamber dates from about 1070 and takes its name from boxes that held gold and silver to be tested for purity to make coins.

The current Westminster Abbey was started by Henry III in 1245 and is “one of the most important Gothic buildings in the country, with the medieval shrine of an Anglo-Saxon saint still at its heart.”

The official name for Westminster Abbey is the Collegiate Church of St Peter at Westminster. However, the abbey doesn’t operate like a regular church reporting to the hierarchy within the Church of England. Around 1560, the abbey was designated with a special “Royal Peculiar” – which is a church responsible directly to the Sovereign.

Over 3,300 people have been buried or commemorated at Westminster Abbey. This includes seventeen British monarchs including King Henry V and all the Tudors except for Henry VIII. Other notable people buried at Westminster Abbey include Isaac Newton, Edward the Confessor and Charles Dickens.

A late tradition claims that Aldrich, a young fisherman on the River Thames, had a vision of Saint Peter near the site. This seems to have been quoted as the origin of the salmon that Thames fishermen offered to the abbey in later years – a custom still observed annually by the Fishmongers' Company. The recorded origins of the Abbey date to the 960s or early 970s, when Saint Dunstan and King Edgar installed a community of Benedictine monks on the site.