The Golden Circle Classic without hotel pick up 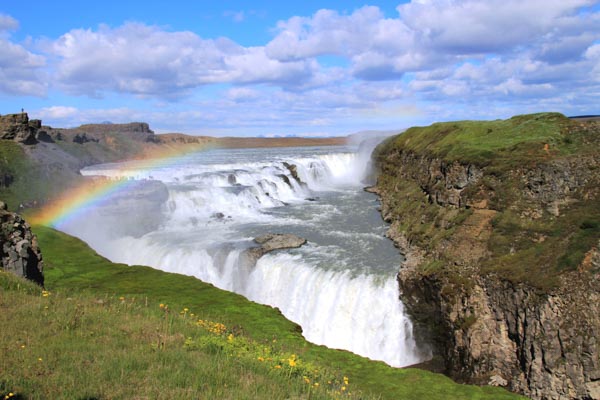 Our outing begins with an exploration of Þingvellir National Park, a UNESCO World Heritage site where the textonic plates of North America and Eurasia are pulling apart - slowly but surely. You'll see one of Iceland's largest natural lakes and learn the remarkable story of how Icelandic parliament Alþingi was established in the year 930 AD. Known as the ‘Assembly Fields’ or ‘Parliament Plains’, situated around 45 km east of the capital, they were the first home of what has become one of the oldest parliamentary institutions in the world.

From Þingvellir, the tour continues through an area of beautiful scenery towards two of Iceland's greatest natural attractions at Gullfoss waterfall and Geysir hot spring area.

At Gullfoss waterfall you can take a short walk down a pathway and get right up close to this powerful waterfall and feel the mist of glacial water on your face as it cascades down into the narrow Hvítárgljúfur Canyon.

Returning from Gullfoss, next stop is the Geysir hot spring area where you'll get to walk amidst hissing steam vents, sulfurous mud pots and get up close to an erupting geyser. Home of "The Great Geysir" hot spring, which all geysers are named after, this area is an impressive collage of bubbling mud pools, hissing steam vents, and colourful algae deposits. It also features one of the world's most reliable fountain geyser, Strokkur hot spring, that every 4 to 8 minutes blasts out a column of super heated water up to 20 metres into the air.

From Geysir hot spring area, the return journey takes you past lakes Laugarvatn and Apavatn on the way back to Reykjavik.